The Virtual Arena: How Safe Are You In It?

Continuing his regular column for VRFocus – leading exponent of the out-of-home entertainment sector, Kevin Williams, takes time away from reporting on the latest trends, and reveals the fundamental issues of how safe the player is sharing headsets in the public-space.

As with all tech-trends, along with the innovation, a lot of hyperbole usually surrounds the core technology. That hype will swirl and dance around the reality of the application, and inevitably manifest itself into a scare-story. This latest phase of interest in virtual reality (VR) is no different and has inexorably been drawn to the dark side. This now sees the blind leading the blind concerning the speculation of contamination in using HMD’s in public settings.

Having been involved in demonstrating and operating VR technology in out-of-home applications since the 1990’s; I think you can all agree that we may have some experience in the realities of usage in this environment, and more importantly be able to address the issues that are actually of value in this deployment.

We have seen many head-lines in popular media questioning a possible danger of infection with disease from the use of a headset during a public demonstration. Speculation of catching “Oculuar Herpes”, “Pink-Eye” or other germs or viruses. But also, a common concern is of bacterial transmission and infestations (such as hair lice) that sharing a head-mounted device could speculatively transmit from user to user.

But the reality of deployment and contamination is far less sensational as the miss informed would have the public believe. And that in a history of deploying VR in public-space many important lessons have been learned.

Rather than a new application, VR has been in operation in high-foot traffic locations, serving player upon player, since the 1990’s. The first VR amusement systems were deployed in amusement and attraction venues back in 1992, and have seen a constant stream of players using the head-mounted gaming experience. Rarely mentioned, the Walt Disney Corporation operated from 1997 till only a matter of months ago (2016) one of the longest running VR experiences at their DisneyQuest indoor theme park experience.

Within this five-story facility, several ground-breaking immersive digital attractions were operated including two VR attractions. One of these included the influential VR experience Aladdin’s Magic Carpet Ride, based on the Walt Disney Imagineer technology experiment Disney Vision Adventure; first installed at EPCOT in 1994 seeing some 45,000 guests experience the then new concept of virtual reality. The DisneyQuest attraction derived from this work, and became the longest constantly operated VR attraction to date – Aladdin’s Magic Carpet Ride having entertained over a million guests at the venue.

The secret to this VR installations issue free success being used by thousands of guests at a time, is in the application of lessons learned from the original experiment and the fundamentals employed by the theme park industry as a hole. The use of a special separate, detachable head-liner factored ease of usage of the (in today’s comparison), crude VR headset. The specially developed DisneyVision visor created to offer a simple and easy to clean platform between guest. As simple as the methodology seen applied with ‘3D cinema’ glasses used by millions each day, and which have equally not been the hub of a spread of bacteria or virus. 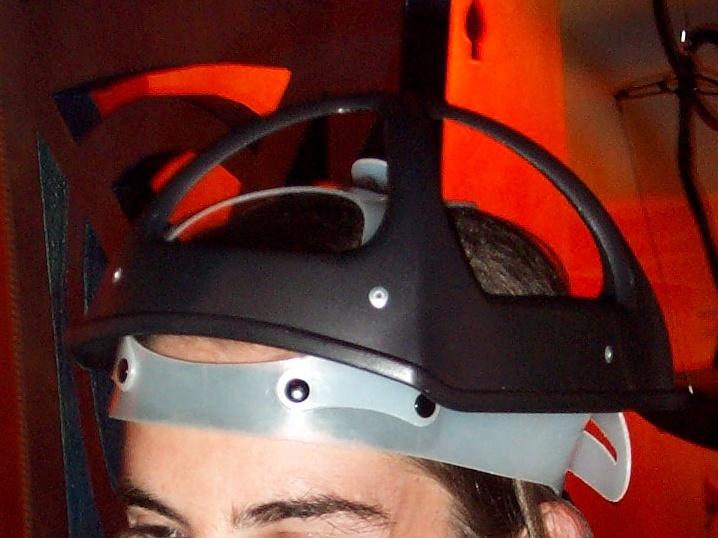 What has been defined as the “Three-R’s” – all head-mounted displays (HMD’s) hoping to be applied in the crucible of public-space entertainment must be Robust, able to survive being dropped and manhandled by hordes of guests. They should be Resilient, offering a durable but simple design that is created to offer no medium for the transfer of germs or virus and are simple to clean; and finally, they must be Reliable, offering a simple fit for different anthropomorphic head shapes to be catered comfortably, and able to operate continuously.

But beyond the use of specially developed HMD’s like DisneyVision, the current VR arcade and attraction scene has seen the deployment of consumer based headsets into the public arena. First with deployment as development kits at game conventions, then later used as attractions at venues. One of the best examples of a venue that has seen thousands of guests experiencing VR in an out-of-home entertainment environment has been supplied by BANDAI NAMCO Games. The Japanese amusement powerhouse undertook a year-long experiment to create an ideal game facility to evaluate the best practises of deploying VR in an arcade setting.

The VR ZONE Project i Can, opened in a Tokyo mall in April, the special facility offered the best in VR entertainment to those prepared to reserve a slot to visit, (often booked weeks in advance). Already covered in detail in a previous report – fundamentally, the VR ZONE evaluated, along with many things, the best practices of deploying what is basically an updated HTC Vive (Business Edition) headset into a public environment. Along with an appropriate cleaning regime, BANDAI NAMCO’s team also addressed the perceived issues of operating a HMD in a society super sensitive to such intimate contact of a shared device.

In addressing this issue, BANDAI NAMCO became one of the first to deploy the “Ninja Mask”, as a shield in using VR head-mounts. Based on the already familiar Japanese facial mask, this variant was created that fitted over the eyes. A means to personalize the usage, and hope to negate sweat and makeup from one user to the next. The system also hoped to alleviate the red mark that surrounds a user’s face after extended contact with the headsets gasket. The VR ZONE, (like DisneyQuest), only recently closing but gaining valuable data on how to deploy VR to a mass audience.

What has been learned from all these, and the many, applications of VR in public-space is that a level of professionalism of deployment is needed when dealing with a large audience, being ushered into a virtual experience. Where the game convention demonstrations may have been laid-back to the needs of appropriate usage of the hardware, the commercial sector must be much more professional and aware of the issues.

Regarding the best practise of deploying VR in the public space, the issues can be broken down into two key elements:

Cleaning Regime: The need for an appropriate means to clean the HMD between user is both essential to alleviate any possible transfer of medium, but also to act as an appropriate demonstration of best practise to the guest. Large theme parks have already started to deploy VR on their attractions, and all have created a dedicated regime regarding operation of the headsets on their rides.

Examples like the Galactica at Alton Towers theme park, in the UK – sees a steel-coaster converted to operate as a VR attraction, specialist headsets created with weatherproof shielding, and an easy clean interior. Also, the attendants operating the ride apply a “Wet & Dry” cleaning procedure for guests; a wet wipe-down when the unit is taken off the guest, and a dry wipe-down when handing to the next.

The use of the correct cleaning materials is essential, many of the early demonstrations saw a confusion of methodologies. Disposable baby-wipe tissues mistaken as being appropriate, and the issues of using alcoholic wipes on sensitive skin and hardware. Nowadays all operators have been schooled in the appropriate non-abrasive anti-bacterial cleaning material.

Appropriate Operation: The need is also in training of the attendants to the best practise of loading and unloading the guest into the VR experience, how to place the HMD on the face, and to ensure not only that the unit being handed to them is clean, but is operating correctly.

The attendant must pay more heed to the concerns of the guest, not familiar with venturing into a virtual experience, and much of the preparation is to ensure they are at their ease. The concerns about the guest’s appearance seem to factor more than the concerns of bacterial issues. The avoidance of “Oculus-Face” (the red mark around the face, left after contact with the gasket) has seen in some cases the deployment of disposable “Ninja Masks”. While the deployment of special covers over the HMD offer a better material for wipe down and the avoidance of bacterial transfer.

Along with ensuring correct cleaning and operation, the attendants also need to be trained to check the guest’s reaction to the experience; the issue of Sim-Sickness and disquiet with experiencing VR for the first time are all aspects that need to be checked when operating a complicated and new technology, such as VR, to a large audience.

So, in conclusion, the deployment of VR into the public-space is not new, and the hidden issues are not unknown. Be it, 3D cinema glasses, bowling center shoes, or go-kart crash helmets; the need for appropriate cleaning is essential, but also best practise in operating technology like VR. Though the speculation of horrendous situations may be peddled by social media – only now coming to the realization of the popularity to try VR outside of the home – as always there is no need for alarmism, but professionalism is essential.

Following hot on the heels of this feature, I will be turning the gaze to the explosion in interest in ‘VR Arena-Scale’ platforms, seen by many as VR’s answer to lasertag, and the application of attraction style implementations of this exciting technology.

Kevin Williams, is a widely-respected specialist on entertainment and technology. A regular presenter at international conferences, Kevin is also a regular speaker at the Foundation Entertainment University (FEU), a bootcamp for FEC investors, as well as a senior Judge of the VR Awards.

Kevin is editor of the Stinger Report, a-must-read for those working or investing in the amusement, attractions, and entertainment industry. Along with this, he is also a prolific writer with regular columns for the main trade publications in this market, along with presenting numerous conference sessions on the sector and its global impact. He is also the co-author of the only book on this aspect of the market – currently working on the next edition, scheduled for publication soon. Kevin can be reached at kwp@thestingerreport.com.

The VR Drop: Aiming for a Fruity Jam

Taking the First Steps Into an AR Metaverse